Game of Thrones is one of the most popular tv series today and no wonder, it’s just so brutal and beautiful at the same time. Season 7 premiered yesterday world wide and must say every episode is a delight and the first of seventh season doesn’t make an exception. This review contains spoilers, so make sure you read after you have watched the episode!

This review will contain detailed opinions about the last episode

The episode starts when Walder Frey rambles about the second feast. He has invited all the best men that helped him at the Red Wedding and gives a speech. However, there’s an ominous tone, and as a viewer, you soon notice something’s not right. The feast brought up the Red Wedding at the moment when it was all “fine.” And yet, all meaningful Freys are invited.

“I knew it!” was the first feeling when saw the wine was poisoned. But what we could not have foreseen was the next scene where it turns out Frey is actually Arya Stark who is using the skills obtained from the Many-Faced God cult. They saw it coming though. And I’m quite sure Arya won’t stop here, she won’t rest after every god damn Lannister is dead.

When people ask you what happened here, tell them the North remembers. Tell them winter came for House Frey.

In the next beautiful scene, we see a bunch of white walkers, the living dead, zombies of beyond the wall, whatever you want to call them. Most of the wildings are joined to the army, and we see a white walker giant. Scary.

Meera Reed and Bran Stark found their way to the north side of the wall and Bran convinces Edd, a member of the Night’s Watch that he is Stark indeed by telling him where he knows Edd has been and what he has seen. Meera and Bran are taken inside to safety, and after this, we don’t hear about Bran any longer in this episode.

Meanwhile, Jon is taking the lead and talking to all the allies about how they should pursue to beat the white walkers. They will need the dragon glass, lots of it. Sansa disagrees about the Karstarks who betrayed the Stark family, but Jon is willing to forgive them for the common good. Jon is angry to Sansa, and for a good reason, she really was undermining him. I’m more in the Jon-team, I don’t know why but Sansa is becoming quite a bitter character. She’s been though a lot though.

Cersei Lannister sends Jon a pitiful raven, “surrender now or die” – the type of thing. I think this part of the episode is meaningless and strange, especially when taking into account the next scene where Cersei realizes enemies or traitors are in every direction and the Lannisters right now “look like the losing side” like Jamie puts it. The Lannister castle looks like so empty for the first time, but that’s the reality, the old man is dead, the kids are dead and “the imp” switched sides.

That leaves us the ironborns we see next. Euron Greyjoy is a twisted, backstabbing guy who murdered his own brother and enjoys the amusement of his kind dying. What a crook. Suitable fit for Cersei I say, but she is not convinced when he offers his hand in exchange of the fleet. He promises to get her a “priceless gift” and won’t return to King’s Landing until he has that for her. I can’t think what that gift would be but sounds like he is hunting someone from the Stark family, or some other priceless thing that Cersei fancies. Non-material, that is, for sure. 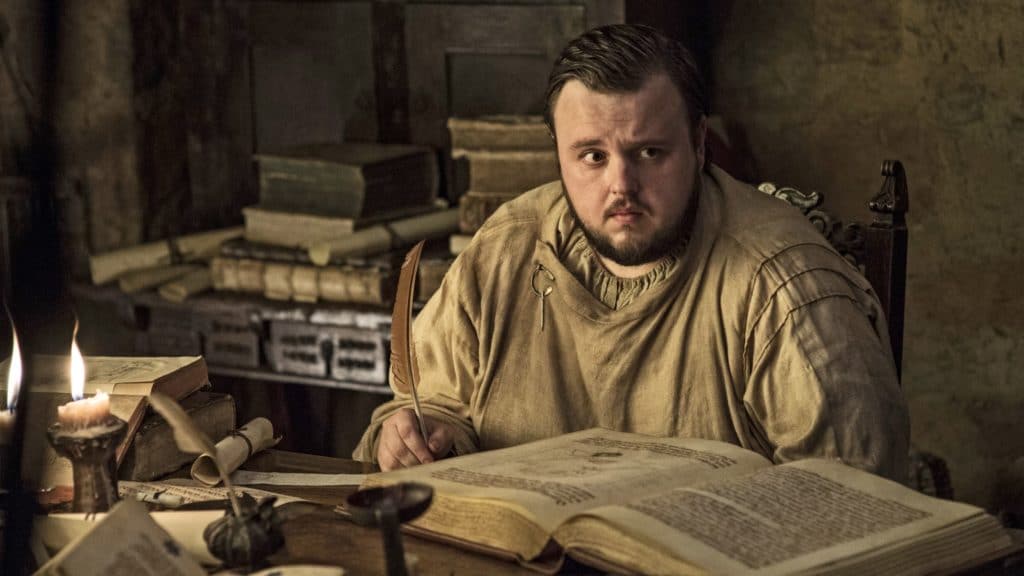 Oh, Sam, the librarian. He’s fed up with chores, and I have to say I laughed for the brilliant cinematography in the following scenes. He is literally cleaning the wet poop and then serving the soup that looks like the same. The transitions in these scenes are magnificent. And boy, those burps. Jim Broadbent who is Archmaester Ebrose is a familiar face from the film “Filth” (2013) by Jon S. Baird, recognized him instantly. Sam is eager to know more about how to beat the white walkers and soon finds out the info from the restricted area. The dragon glass can be found from Dragonstone and he needs to deliver this info to Jon as quickly as possible.

In the meantime Little Finger chats with Sansa who is seemingly less and less interested in his company. Brienne of Tarth comes by, and he leaves, and Sansa states she knows exactly what he wants, that being Sansa, obviously.

For hands of gold are always cold, but a woman's hands are warm.

Arya continues her journey and bumps into a band of soldiers from King’s Landing, first careful about their weapons but they are quite warm and welcoming and, young and unexperienced, or so it seems. That scene seems a bit meaningless until you look and listen more carefully.

That’s Ed Sheeran singing and acting. The scene is a gift for Maisie Williams who plays Arya as she is a big Ed Sheeran fan. When she states she is going to kill a Queen, there’s a small pause, and then they all burst to laugh. Of course, nobody is going to believe such a crazy thought. But again, they don’t recognize her and are unaware and a bit naive.

Ah, Sandor Clegane, as we know him by the name The Hound, what a character. He is still with the Lord of Light men, and we see both his harsh side outside and gentle side when burying the people found in the abandoned house. Or then he really knew those guys. He has certainly changed a bit after the warrior in the service of House Lannister times. Surprisingly enough, he finally seems to see something in the fire. White walkers or possible future that is. 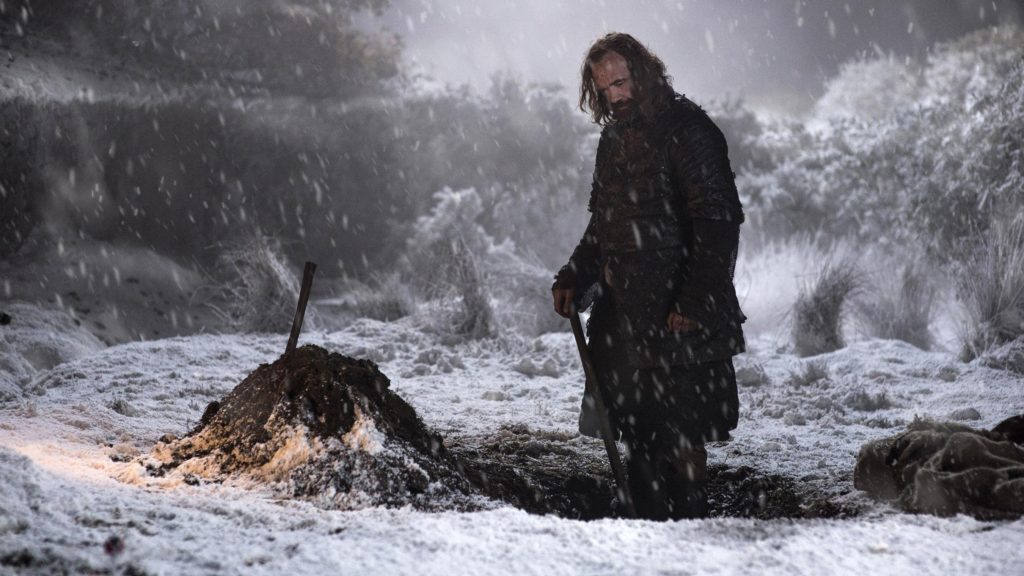 In the final scenes, we see a glimpse of Ser Jorah, who has traveled to Oldtown seeking a cure for his greyscale and is held in one of the sick cells in the Citadel. As Samwell Tarly is collecting empty bowls from cells, Jorah reaches out for him, his infection having spread rapidly, and asks if Daenerys has reached Westeros yet. We see the answer to his questions in the next scenes, where Daenerys arrives at the Dragonstone where Stannis Baratheon used to rule. She removes the Baratheon banner and states, “shall we begin?”. Cliffhanger. Boom, ending credits. But it is just a start.

What a great start for the season indeed. The scenes, characters, and plot is so beautiful and exciting that it is no wonder why this show is so popular. This episode is only scratch to the surface, we’ll see a lot of answers during this season. I’m glad Game of Thrones is here again. I have nothing more to add at this time. We’ll see next week what happens!

I hope you enjoyed this review. If you wish me to write more similar stuff, comment below or tweet me!