Naturally, I have to state first that this review/recap will contain spoilers. Do not read further if you have not yet seen the episode.

In this weeks’ episode, Tara tells the secret about another community of women with guns. I understand her decision, because they really need the guns and The Saviours took everything from them. First I thought it the entrance to the village is going to be risky and bloody, but it seems they have planned it out perfectly. Michonne in the tree with the rifle and all. Well, Rick is not stupid in this kind of things.

In the meanwhile, Maggie is taking care of the farming in the Hilltop residency. Hershel would be so proud. She teaches hilltopians to do gardening and goes outside the gates to get a bush of wild blueberries which would last 40 years, according to her.

Usually, we get two simultaneous stories tops, but this time we see right away what happened to Sasha. She did get caught, but that does not come as a surprise. We don’t know how many Saviour she took with her rampage act. She is in a cell and some guy introduces himself as David. He tries to be “nice” and talks about the rope they tied her up a night earlier. Something perverted in this guy, but we soon find out he wants to rape Sasha. Then Negan enters the room. Long story short, he doesn’t approve raping and sticks a huge knife to his throat.

I got to hand it to you. You've got some beach-ball-sized lady nuts on you, coming in all kamikaze like that.

Then the infamous Negan “conversation” starts. He flatters her, compliments her “beach-ball-sized lady nuts” and then gives her knife and four options. She can choose to attack Negan from the sitting position, slit her own wrists, wait “David” to be reanimated as a walker and let him eat her or kill “David” with the knife. And then he indicates he wants Sasha to be one in his army. I can’t believe he wants that after Sasha killed many of his men. I think he is bluffing and teasing, I don’t know but seems crazy.

Then Eugene comes to talk to Sasha, and she is genuinely asking “what did they do to you?.” Eugene states he is safe here. Smart man, but a coward. Although he admits it himself.

Then back to the Hilltop where we meet Maggie digging up the blueberry bush. All-so-mighty Gregory comes down and starts his typical awkward small talk. “Why are you still here?.” First disrespect, then wants to make amends, then when Maggie wants him to look out for the walkers while she digs, he considers backstabbing her with a knife! What an imbecilic! When the walker comes, he wants to be the man “to protect the pregnant lady” and not another way around, he pussies out, as usual. I watched in exultation when another walker came on top of him and he screamed “Maggie, help me!”. Kind of feeling sorry for him.

When a group of Hilltop residents submissive to Gregory come back, Maggie shouts “he never killed one”, “he’s learning” in which they answer “That’s not what he told us”. Well, we know by this moment Gregory is not the most trustworthy guy. He just wants to save his own skin by compromising others’.

In the meanwhile, Tara hides in one of the women’s’ houses and tries to persuade the pack of women to fight with them against the Saviours. The leader woman, the irritating older one called Natania, is strictly against it, but Tara says they will take all the guns anyway. Then the bombs blast, the leader woman distracts Tara, only to notice her gun is empty. As Tara says, they are not there to hurt anyone. They just need the guns and it’s a big bonus if the women join their cause. Natania doesn’t agree and takes Tara as a “hostage” with a gun pointed to her head. 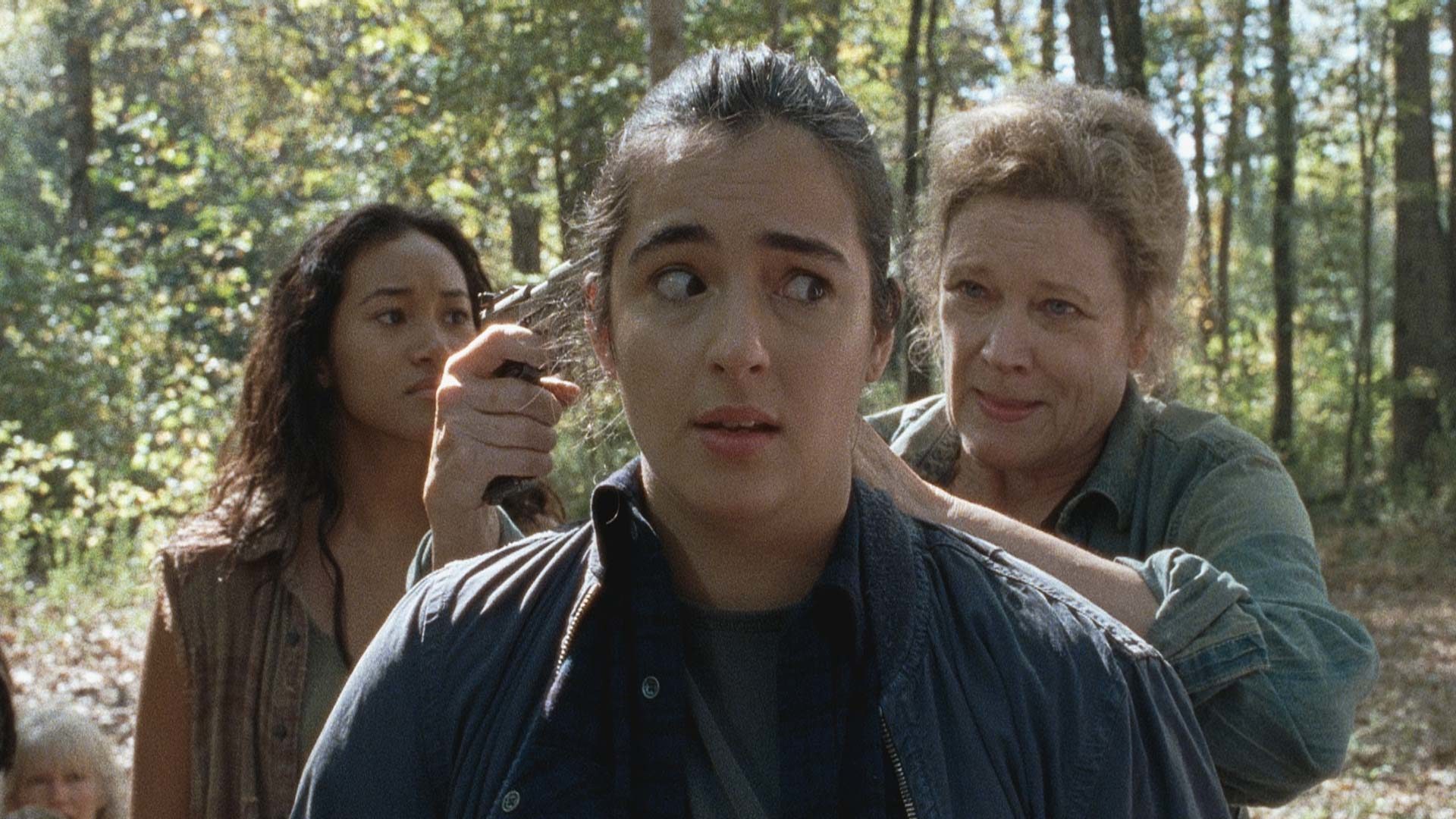 In one point it looks and sounds like Natania is going to shoot Tara, as she says it out loud. Michonne is ready to pull the trigger, but Tara shouts “don’t do it Michonne”. This is very suspenseful part of the episode and I like this kind of tension very much in The Walking Dead. But then, just when things are escalating, a pack of walkers arrive and Natania’s granddaughter hits her in the head. Not all women in the group agree Natania, I’m sure of it. After getting rid of the walkers, Natania states blatantly, “take your damn guns and go”.

In the Saviours’ camp, Sasha is sort of giving up to Negan by signaling him she might want to co-operate. The next day will be “a big day” according to Negan. Then a quick cut to Hilltop, where Gregory is planning a trip to somewhere with a map. It seems, he is really going to meet Simon and tell him about Rick’s group. I hope not. Stupid, coward Gregory, I hate him.

When Eugene comes behind Sasha’s door, she sounds like she wants to end herself to prevent the Saviours from using her to hurt Rick’s group. So she asks Eugene “anything” she can use to kill herself. But her face tells us she is expecting a knife or something, to try again killing Negan next time she visits her cell. Instead, Eugene provides her the death pill he made for those two women in the couple of episodes back. Sasha gasps in disbelief. She is literally screwed.

Rick and the group get the guns and leave the women. Soon they find out Rosita has returned. With a Saviour-prisoner. Dwight is locked in a room. Daryl tries to get to him but others stop him. Rick is confused and not happy, takes his gun and tells Dwight to kneel. The episode ends and we are left wondering what the heck.

Amazing episode, full of events and even some action. It’s quite hard to predict where the show is going from this and that’s what I love about The Walking Dead. I’m sure the finale next week will be a blast.